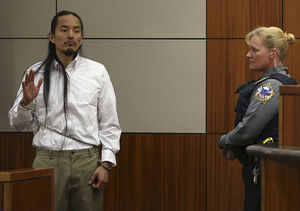 Special Prosecutor Adrienne Bachman asked for early recess the previous day and to recall George Frese in the morning so she could “que up audio” to complete his cross-examination. When Frese was back on the stand for a large part of Friday’s proceedings Bachman did not play any audio, despite having cited her need to do so as the reason for recall and delay. Instead, she relentlessly asked Frese about the false confession he made to investigators and his level of intoxication that night. Frese, who had provided very emotional testimony the previous day, was very composed and clear on the stand during cross-examination. Frese testified, as multiple witnesses testified to in the original case and as he stated during all original police contact, that he drank heavily with friends the night in question and that although he can thoroughly account for his whereabouts until around 2:00 am, his memories of the last hours of the night are compromised by blackouts and extreme intoxication. During original interrogations officers capitalized on his level of intoxication, and after hours of questioning and threats from detectives that if he failed to acknowledge some involvement they would use his lack of memory to ascribe more severe involvement,  Frese eventually admitted that it was possible he had been involved. On the stand, Frese reiterated claims of innocence and rehashed the events October 10 and 11, 1997 through a prolonged and aggressive cross-examination. 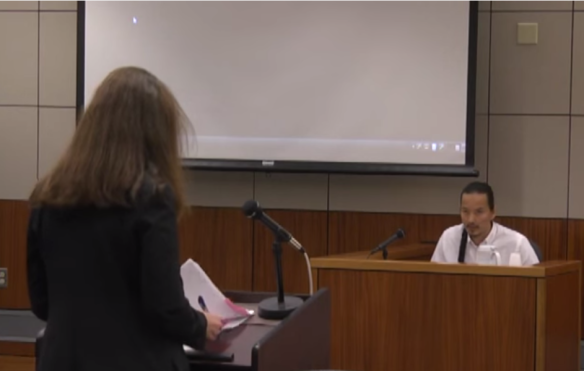 Bachman focused heavily on the same tactic as original investigators, insinuating throughout her cross-examination that because Frese could not account for his movements during the entire night, he could not make a claim to innocence.

“Because you didn’t know what your motive was that night, did you?” Bachman demanded.

“Because there isn’t any, because I didn’t do it.” Frese countered.

“Well, you don’t actually have a memory of whether or not you did it, do you?” Bachman said.

Bachman also focused on the original interrogation and the statements made by Frese implicating himself.

Frese was followed on the stand by Lesley Hammer. Hammer is a forensic scientist, and expert in causative instrument forensics. Her testimony related to a court exhibit used to convict the men in their original trials. The exhibit, created not by a crime lab but by Detective Aaron Ring and Prosecutor Jeff O’Bryant, has long been in question, and reporter Brian O’Donoghue’s investigative reporting on the case unearthed significant issues with the exhibit in 2008. Hammer confirmed that the original exhibit was totally unscientific. Dr. Falico, the state medical examiner at the time of the original trials, bolstered the perceived validity of the exhibit used to obtain convictions. Hammer testified, however, that Falico did not appear to understand “even the most basic” tenants of forensic science, including the importance of scale, the elastic nature of skin and basic examination of markings, and was entirely unable to evaluate the nature of the victim’s injuries. “There didn’t appear to be some of the basic understanding of the discipline itself,” Hammer said.

Hammer went on to discuss the nature of footwear impression comparisons to injuries and her own evaluation of the case evidence. She pointed out that skin’s elasticity and the motion involved in kicking or stomping make it generally impossible to identify the causative instrument in as simple a fashion as was described in the original trials (holding a boot up to a face).

Hammer was able to entirely debunk the original exhibit, plus testify definitively that none of Hartman’s injuries matched the footwear of the Fairbanks Four. The original prosecutor argued that the exhibit proved the injuries to Hartman had been caused by Frese’s boot, but Hammer testified that not only were the injuries not caused by Frese’s boot, they were not caused by any boot. Tennis shoe type footwear could not be excluded.

Hammer was a longtime employee of the State of Alaska Crime Lab and now owns an independent forensics consulting firm. Her testimony, much like the brave testimony of the Alaska State Troopers, represents some significant dissention in the rank and file of the prosecution’s own people. Hammer has made a long career testifying FOR the State of Alaska, which makes her testimony all the more compelling.

Kevin Pease is expected to take the stand Monday, October 19 2015, with Eugene Vent and Marvin Roberts to follow in the days afterward. The case was originally scheduled to only take a month, but as prolonged cross-examination and procedural bickering instigated by the state continue it is becoming clear that proceedings will last longer than anticipated. It is also worth noting that the State has a standing objection on record to the admission of Lesley Hammer, based on the idea that the information presented is not new, and that the exhibit was already questioned during the original trials.

The Friday proceedings were interrupted twice for closed hearings on an undisclosed matter, though likely related to the testimony of Jason Wallace. It was disclosed this week that Wallace was granted immunity and is expected to testify for the state. We will make a separate and more detailed post about the unusual developments surrounding Wallace, a man and an issue long surrounded by secrecy in this case.

Day after day, the proceedings in the exoneration efforts of the Fairbanks Four function as not only a resounding demonstration that four innocent men have been imprisoned for perhaps the most infamous murder in Interior Alaska, but also as a scathing expose of the misconduct and conspiracy on part of agents of the State of Alaska both then and now that led to the wrongful convictions. It is strange, although in the end perhaps a good thing, to see the State of Alaska continue to flounder so desperately to defend the convictions. The movements of the State, precise and exacting during the original trials, are as seemingly random and impossible to pin down as a fish out of water. Indeed, in a court where truth has been admitted, purchased witnesses exposed, and misconduct unearthed, the State does find itself in foreign territory. They are clearly accustomed to operating with less transparency and accountability. However poorly positioned the State seems now, the case is far from over, and if the past is any indication we can expect a flood of snitches, pretend science, and plenty of smoke and mirrors in the weeks to come.