Fairbanks Superior Courtroom was packed Thursday as the first of the Fairbanks Four to testify, George Frese, entered the courtroom with his hands cuffed to a chain around his waist. George Frese was dressed in bright yellow, the word “prisoner” in block letters across his back in faded black. His hair, streaked with sparsely with gray, was half braided and fell past his waist. After some opening proceedings he excised under guard to another room to change his clothes, and returned in white to take the stand

George Frese’s own pro bono attorney, Bob Bundy of Dorsey and Whitney, opened questioning. Frese answered questions about his background, upbringing, and life prior to the days in October of 1997 when he was arrested for the killing of John Hartman. Questions eventually led to the night of October 10, 1997, and George recounted a night at home drinking with friends, a clear memory of leaving his apartment around 1:30 am for a wedding reception and party, and ultimately how he drank enough that night that his memories of the early morning hours of October 11, 1997 are hazy. Frese recounted stopping in at a reception, a bar, a party, and getting a ride part of the way home. During that walk, he said, he injured his ankle. When questions turned to the later morning, when a nurse examining his foot fingered him as a potential suspect in the Hartman beating and police began an interrogation that would last many hours and ultimately lead to Frese’s false confession. The attorney asked Frese a handful of questions about how the interrogation felt, and Frese said repeatedly that he was scared.

“Why were you scared?” Attorney Bob Bundy asked.

It was at this point that Frese hung his head and began to weep. With his head down and amidst sobs he said, “They said I did all this shit that I didn’t do. You motherfuckers know we are innocent,” Frese said between sobs,” I’m so tired of this, I did not do this shit.” His voice trailed off as he broke down into unbroken sobs. As Frese struggled to stop crying and regain some composure, he sobbed with his back to the gallery and Judge Lyle called a recess. Many in the courtroom were overcome with emotion as well, and cried as Frese continued to collect himself. After a few minutes he stood up and walked out of the courtroom with a guard.

Hundreds of miles away in Anchorage, as George Frese struggled for composure, many hundreds of Alaskans kept theirs in a powerful peaceful demonstration of solidarity with the Fairbanks Four. The crowd was gathered for the Alaska Federation of Natives (AFN) – the largest annual gathering of indigenous in the state, during which tribes from all regions meet on common issues. Alaska State Governor Bill Walker appeared the same morning on stage at AFN to address the delegation.

Walker has not responded directly to the many resolutions and requests from tribal entities like Tanana Chiefs Conferernce or the Alaska Federation of Natives asking him to intervene in the wrongful conviction case and examine disparities inside the justice system. Walker did, however, make a brief and nearly mandatory mention of the case during his speech, saying “On the Fairbanks Four, we’re not where we need to be on that,” Walker said. “I’m so impressed with your passion on that. I sense your frustration toward me; I applaud your passion.”

As Walker spoke a group of attendees in the back quietly unrolled a banner that read, “Justice for the Four.” They held their arms high, and four fingers up. The gesture spread through the silent crowd until the room was filled with citizens holding four fingers up, looking at the governor.

Traditional chief Jerry Issac joined Governor Walker at the microphone. Isaac asked the elders of his village Tanacross, and neighboring villages, to forgive him for using a grief song. He told the Governor, “In our native way when a death suddenly happens we are shocked, and saddened, and we grieve. In this case there is no physical death, but the forceful and sudden taking of our young men…and we are shocked, and saddened, and grieving…because the facts prove them innocent. The longs years of shock and sorrow, and a want for freedom, inequality in justice, the grieving…our only way to express our frustration, our sadness, is to grieve, with a song that expresses sorrow.”

In the courtroom, George Frese returned after a brief break. The gallery of observers rose to their feet, arms high in the air, and holding up four fingers. Frese teared up when he saw them, tears running down their faces. All those miles away, they heard that song too, and he heard it.

George remained calm the rest of the day. He reiterated and reiterated his innocence, his whereabouts, and answered question after question. Under cross-examination special prosecutor Adrienne Bachman tried to insinuate that Arlo Olson may have recanted due to pressure or threats from George or the four.

“You hate Arlo Olson, don’t you?” She asked.

“No,”  Frese answered plainly of the man whose testimony led to his conviction and eighteen years of incarceration. “He’s a victim in this, just like us.”

Since the testimony of Frese and the demonstrations, Facebook has flooded with users changing their profile pictures to “fours.” There, in the song, in the hands held high, in the exasperated testimony between sobs, in the tears, and in the day, was a simple reminder – we are all in this together.

Hey Aaron, Hey Jeff, Hey Adrienne – can you hear them now? I think that song goes, I am Spartacus. And thank you. Because it takes injustice sometimes to teach us how important justice really is. 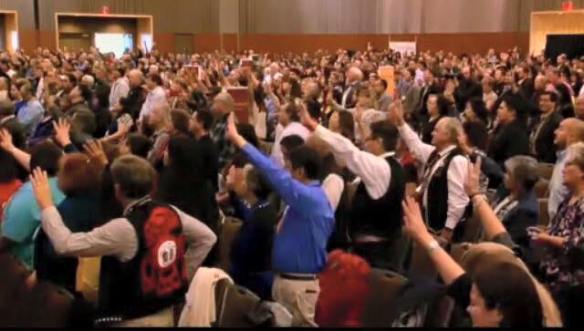 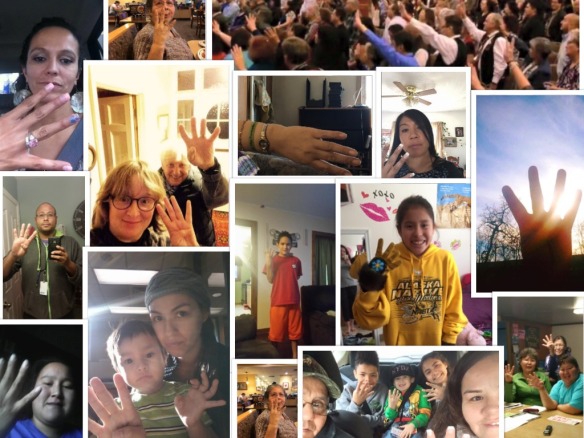 2 thoughts on “Day 9 – George Frese’s Tearful Testimony, and a Massive Demonstration of Solidarity”