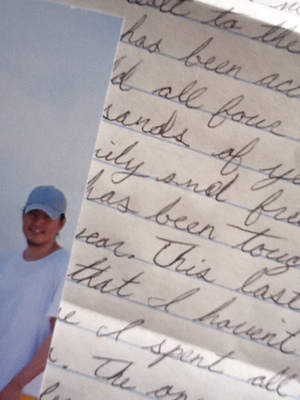 This letter needs little introduction, if any at all. George Frese wrote this from his cell in Spring Creek Correctional Center, a maximum security prison where he is waiting. Waiting, approaching his 15th year of incarceration for a crime he did not commit. A crime to which no physical evidence ever connected him, committed against a boy he never met, on a night he spent with half a dozen alibi witnesses. Most importantly, a crime that people outside the walls confining him have information about. Information that could allow him to receive a new trial. This information is the key that unlocks his cell and sends him home. These people have chosen to remain silent for many years out of fear and a false belief that someone else should come forward, and that their non action hurts no one. This letter is to them.

They say time heals all wounds, but what if it was the complete opposite? Where every moment that passed you by was an accumulation of pain, sadness, loneliness, and missed memories? This is the life that has been dealt to the Fairbanks Four.

Nearly fifteen years have been accumulated. Sixty years when you add all four of our lives together. Perhaps thousands of years when you include our family and friends.

The first fourteen years were tough, but none as tough as the past year. The last year has allowed me to see family that I haven’t seen in nearly twelve years because I spent all of that time in an our of state prison. The ones that I have seen have aged considerably and have caused me to feel a sense of urgency to be home. Old friends come back and new friends have been made.

All this publicity has caused out hopes to soar. Hope that the powers that be will have mercy and give us back to our families. Hope that anyone with information will come forward and free us from our misery. Hope that all this ends. Hope that it happens soon. Hope that we will be free to follow our dreams and not take anything for granted. 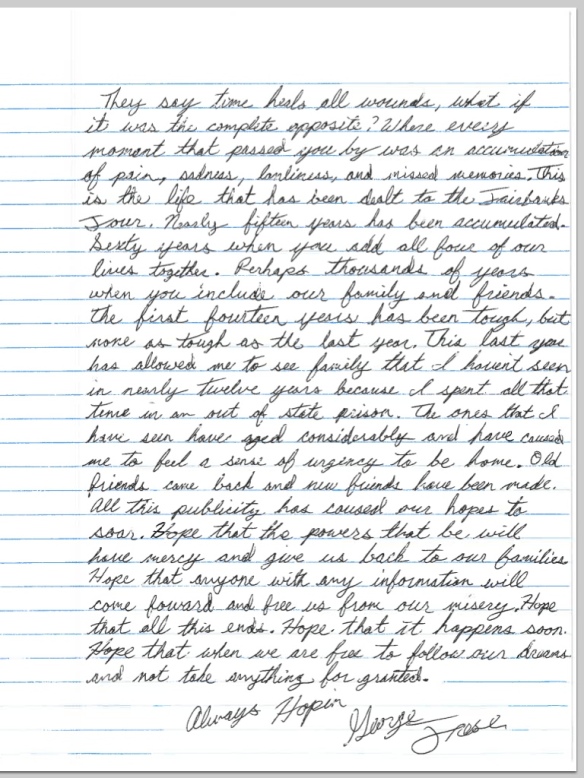 4 thoughts on “Hope – A Letter from George Frese”