Following in the footsteps of many ordinary citizens, local leaders, and more recently Alaska Senator Lisa Murkowski, Senator Mark Begich released a letter to Alaska Governor Parnell asking for swift justice in the case of the Fairbanks Four.

We applaud Senator Begich for advocating for justice. Leaders take a stand when the good of their people is at stake, regardless of the political cost or benefit. Both Begich and Murkowski have taken a risk and demonstrated that they have what it takes to lead.

We hope the Governor is getting the message from above and below: this case is a test of the transparency, ethic, functionality, and intent of the justice system under Parnell. So far, Parnell’s administration and the Attorney General are failing this test.

When state prosecutor Adrienne Bachman announced that the state had just begun its investigation 37 days into their allotted 45 days, the prosecutor’s dismissive remarks were followed in short order by this letter from Senator Murkowski.

Following the state’s request for an extension until May 15, 2014, the letter below from Senator Begich was released. It speaks for itself. 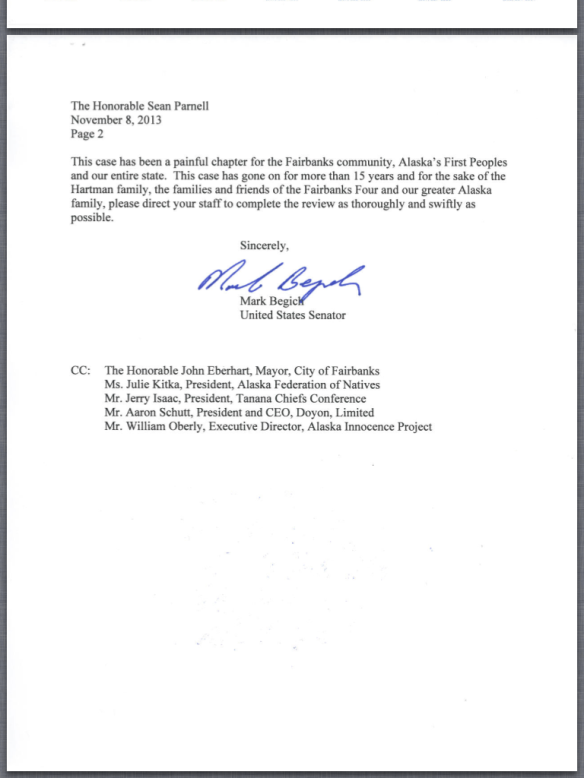 BE encouraged by these letters. This fight has been long and in some ways has only just begun. There remain forces of darkness inside the justice system, but the truth will soon prevail and clear a path so that others will not experience the same injustice. The light is coming.

©The Fairbanks Four Unauthorized use and/or duplication of this material without express and written permission from this blog’s author and/or owner is strictly prohibited. Links may be used, provided that full and clear credit is given to The Fairbanks Four with appropriate and specific direction to the original content.
Loading Comments...
%d bloggers like this: