The last day of the first week of proceedings in the Fairbanks Four case featured critical witness Arlo Olson recanting the testimony he gave at all three of the trails that led to the convictions now in question.

The importance of Arlo Olson’s testimony in the original convictions of the Fairbanks Four is best described by the prosecutor who relied so heavily upon it:

Simply put,” Jeff O’Bryant told jurors, “if Arlo didn’t see what he saw, and you throw out some of the state’s evidence, the state doesn’t have a case. No doubt about it.”

Olson himself confirmed that he did not see what jurors believed he saw, and that in fact he would not have been able to identify anyone.

Marvin Roberts from 300 feet. Olson identified him from 550 feet away, but now claims that testimony was fabricated.

Jurors from the original trials have described in press interviews how heavily they relied upon Olson’s testimony to reach a verdict. Yet, the testimony on which four men were convicted of a brutal murder has come under significant scrutiny for many years. In the original trials, Olson claimed to have seen all four men together that night, and witnessed them commit an assault against Franklin Dayton. Olson claimed to have seen this from 550 feet away, drunk, in the dark, even though the crowd of people he stood among saw nothing of the sort. The testimony itself was predicated on the idea that one lone person in a crowd had been able to see for a distance and in conditions that greatly surpass the known limitations of the human eye, and the details of the testimony were equally suspect. Olson testified from prison on a videotaped deposition that his original testimony had been fabricated, and coached by Officer Aaron Ring and prosecutor Jeff O’Bryant.

Olson described being interviewed by Officer Ring, and testified that the officer slowly shaped a story to fit the case, supplied him with details, took him to the police garage to see Marvin Robert’s car, and only recorded an interview once the story had “shaped up.” Investigative notes created by Officer Aaron Ring confirm some aspects of Olson’s account, including the trip to the garage and the only partially recorded contact. Olson claimed to have been both afraid and persuaded by the officer’s assurance that the men were guilty. Olson went on to describe how he would sit in the D.A.’s office to practice and memorize the testimony.

Despite the State of Alaska’s original position that the Olson testimony was critical, there is no indication that it has impacted their strategy of rigorous defense of the original convictions. Under cross-examination Olson largely held his head down and answered “okay” or “I don’t know.” During the deposition he confirmed that he is on medications and struggles with mental illness.

We have long maintained that Olson’s testimony was false, inappropriately influenced, and came from a troubled young man. His testimony, unsurprisingly, confirms all of that.

Arlo Olson was followed by testimony of public defender investigator Thomas Bole and former public defender investigator Richard Norgard. Bole recounted how in 2004 Wallace’s public defender sent him to see Jason Wallace, incarcerated at FCC in connection with the beating death of a young woman, the brutal stabbing of another man, arson, and a conspiracy to take over a drug ring with partner William Holmes that culminated in the Christmas Eve murders of two other victims. When Bole interviewed Wallace, the inmate confessed to the killing of John Hartman. Bole described Wallace as extremely emotional and related how the inmate broke down in tears repeatedly. 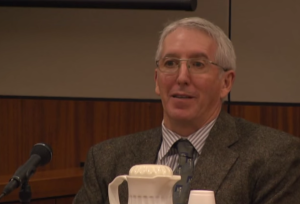 The investigator heard and believed the claims, and according to his testimony was burdened by the information but also unable to come forward, constrained by rules of confidentiality. Bole ultimately discussed the Wallace confession with fellow investigator Richard Norgard, a public defender’s investigator who would eventually go on to found the Alaska Innocence Project. It was Norgard who passed the Bole account to the Alaska Innocence Project, sparking a series of sealed and secret filings, hearings, and a long legal debate over who broke the confidentiality owed to Wallace, whether it mattered, and most importantly, whether or not the information would ever be admitted to a court of law, or if it would remain forever sealed and secret. The statements of Wallace were ultimately revealed through an accidental leak by Jason Wallace’s attorney Jason Gazewood, published by the Fairbanks Daily Newsminer, and republished here. The publication of the statements, according to Judge Lyle, for all practical purposes broke the court seal, and allowed the testimony of Bole and Norgard to be open in light of the breach.

Attorneys for the State attempted to dispute the testimony of Bole based, in part, on the psychology theory of confirmation bias. The idea of confirmation bias is that human beings have a tendency to inadvertently seek confirmation of their preexisting notions and ignore contradictory information. Confirmation bias is likely to have impacted many involved in the original case, but did not make logical sense when applied to Bole. The theory is not applicable in Bole’s situation, as there is no indication that Bole had any preexisting notion to confirm when he walked blindly into an investigative interview with Wallace in 2004. The line of questioning baffled Bole, who reiterated that he hadn’t “known Jason Wallace from Adam” when he went in to interview him. “There is the possibility, sir, is there not, that when you spoke with Wallace you heard what you wanted to hear?”

Bole appeared momentarily speechless, shook his head and laughed in apparent disbelief, and said, “No.”

“Jason Wallace told me what he told me, and I am never going to forget that,” Bole stated.

Under continued cross-examination Adrienne Bachman for he State of Alaska asked Bole whether he feared for his career in light of the fact that the now disclosed statements made by Wallace were subject to confidentiality. He immediately confirmed that he did fear for his career, but said that he was ultimately glad that the information had come out, as it weighed on him.

Amid many procedural losses and victories, depositions and examinations, there was the weight of a terrible secret lifting from many shoulders this week inside the Fairbanks Superior Court. we applaud all who have courageously told the truth in this case, especially those who did so in fear for their safety, their careers, of humiliation and more. Courage is not the absence of fear, but bravery in the face of that fear, and it took real courage to do the right thing in this instance.