In the 1990’s, when accusations of corruption and misconduct ran wild in the Fairbanks legal and law enforcement community, Adrienne Bachman had absolutely nothing to do with the Fairbanks Four case. But don’t get your hopes up that that is a good thing. She was busy engaging in misconduct on her own cases.

Ms. Bachman was a practicing prosecutor for the District Attorney in Anchorage. In the spring of 1990, Judge Joan Katz had the following to say about Ms. Bachman (The Ms. Fedor) and her work.

“While the exact mix of intentional negligence and negligent misconduct may never be ascertained, there can be no doubt that much of the wrongdoing was accomplished knowingly.”

“She revealed a shocking lack of awareness of the legal and ethical responsibilities of her position.”

The judge’s commentary can be read in greater length below: 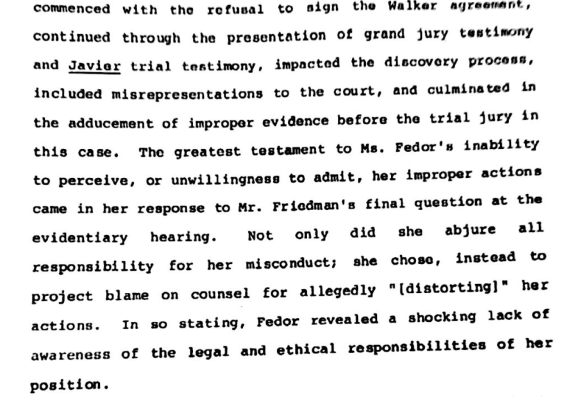 One can deduce from the document that Ms. Bachman knowingly engaged in misconduct which carried on through an entire legal process and resulted in false information being presented to a jury at trial. Then, when opposing counsel called her on it, she denied it, blamed it on them, and showed such a lack of awareness of her wrongdoing that the presiding judge called it “shocking.” Following this episode, Bachman was of course promoted and made her way steadily up the ladder within the District Attorney’s office in Alaska.

When the Alaska Innocence Project filed a petition for post conviction relief in September of 2013, the State of Alaska responded with this dismissive press release, at once promising the public an independent investigation and exposing the depth of their bias. The State then came under significant and immediate pressure from citizens, religious leaders, and politicians to act swiftly in the interest of justice. Senators Murkowski and Begich published open letters calling for a transparent and independent review of the revelations in the filing and pondering federal intervention. Letters to the editor flooded local publications across the state. The Alaska Federation of Natives, Tanana Chiefs Conference, scores of other Native organizations, and the Episcopal diocese all took public positions supporting the claim of innocence and demanding an actual investigation.

The State of Alaska ultimately responded to this outcry by assigning Adrienne Bachman to the case. Bachman is known as an aggressive criminal prosecutor – a conviction-at-all-costs attorney. There is no doubt she is both skilled and practiced at achieving and upholding criminal convictions. However, there is no indication that she is the right candidate for a thoughtful and unbiased examination of a civil petition for post conviction relief. The act of  choosing Bachman to head the State’s response on the Fairbanks Four case shows a shocking lack of awareness of the legal and ethical responsibilities the state has as an agent of justice. The apple, as they say, does not fall far from the tree.

To assign an aggressive prosecutor to a case where the convictions are in question and an independent review has been promised speaks volumes to the state’s intention with the case. To assign a prosecutor with a significant history of perjury and misconduct to an extremely public case so haunted by accusations of prosecutorial and police misconduct is…..confusing. Does the state not have access to a prosecutor who hasn’t engaged in misconduct? Is this the ultimate figurative middle finger to the petitioners, their attorneys, and every Alaskan whether a leader or citizen who asked for actual justice? They are attorneys, so they know to maybe be worried about getting sued later, right? Is this a joke? Like, a really inappropriate and poorly done joke? It defies explanation.

It would be wonderful to address the conduct of the special prosecutor as it relates to this case and assure readers that her “shocking” conduct is a thing of the past. However, this case began with Ms. Bachman’s request for a delay to accommodate, among other things, her vacation. That was followed by this fascinating interview with Indian country in which Ms. Bachman managed to tell enough lies that a post detailing them was longer than the interview. Then, there was this NPR interview where she boldly insisted that comparing Natives to unruly slaves lying ala Spartacus was not racist at all, following in the steps of original prosecutor Jeff O’Bryant (read about his controversial ‘Spartacus’ argument HERE),there was this insane attack on Scott Davison for having the gall to come forward without a bribe, the revelation that a murder confession was known and covered up in the case, and a virtually unending onslaught of offensive and dishonest statements, a fan favorite being when she made a filing attacking the credibility of William Holmes, AFTER she had administered and he had passed a lie detector test.

The counter-argument that some within the profession of law, particularly prosecutors, would supply to defend Ms. Bachman’s actions is that her actions fall within standard practice for prosecutors, or that she is ‘only doing her job.’ Although we can appreciate that people who do these kinds of things may need to tell themselves these bedtime stories to fall asleep at night, these excuses hardly make the choices acceptable.

Doing the wrong thing because other people do the wrong thing does not make it okay – it makes it a conspiracy. Doing the wrong thing for money is just gross. Do we really need to explain why receiving a paycheck for doing something wrong is probably even worse, but at best just as wrong, as doing it for free? The greatest travesties of humanity have been carried out by people who used the same excuses. Nazi soldiers did things like install new piping to gas chambers so as to more effectively murder thousands of innocent people, chatted over coffee while their victims clawed the  metal walls and begged for mercy, yanked screaming children from their mothers, and went home at night and told themselves, ‘everyone is doing this.” When the war was over and they were taken to trial in Nuremberg to explain how they perpetrated such atrocities, they all used the same defense so consistently that it has come to be known as the “Nuremberg defense.” The premise of this defense is “Befehl ist Befehl,” or “I was only following orders.”

It is hard to say whether the State of Alaska selected Bachman because they felt she was the woman for the job (the job, of course, being holding faith in these convicitons into delusional territory and without regard for actual justice), or if they just chose to throw her under the bus by handing her someone else’s impossible mess to clean up while those with meaningful power hid from the ramifications of this failing case. Either way, their selection of Ms. Bachman and her ensuing conduct since have made it entirely clear that the State is not interested in justice, honesty, or transparency. Some day, when this verdict is clear and this case takes its rightful place as an important moment in the civil rights movement of Alaska, this story will be told in its entirety for posterity. History will remember, and it will all be made clear. Until then, we can only hope the best for all, and that everyone involved will make choices they can be proud of later, because someday these choices will be examined by history and aired in a court higher than the one of man.