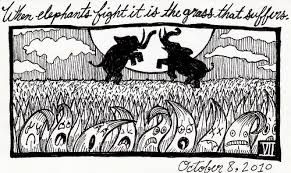 There is a popular Swahili proverb “Wapiganapo tembo nyasi huumia.”

Translated, it means, “When Elephants fight, it is the grass which suffers.”

It is a poignant reference to the structure of most societies. When kings fight, soldiers die. When the rich argue, the poor starve. Nearly all specific injustices take place inside a larger universal injustice. Every family who said heart-wrenching goodbyes today on the frontlines of wars did so inside the larger injustice of genocide, inside the even larger universal injustice of religious discrimination and hate as rhetoric for political gain. Which is to say, nothing happens in a vacuum, a specific injustice is always a symptom of a universal one, and this case is no different. Through discussion about the players and circumstances in the Fairbanks Four case we hope to shed some light on the bigger injustices.

By October of 1997 the Fairbanks Police Department Chief and his right-hand men were struggling to maintain control under the weight of a series of scandals that had rocked public faith in the system and had severe financial consequences. John Hartman’s murder was arguably the most notorious crimes ever committed in Fairbanks, and the public demand for swift justice was overwhelming. The men in power in the “golden heart city” simply could not afford another scandal.  It was in this climate that four young men were accused, arrested, and convicted of the murder of John Hartman.

All four men have maintained though nearly eighteen years of incarceration that they are innocent, and evidence mounts indicating that they are indeed innocent. The investigation and trials which led to their convictions are haunted by accusations of corruption and conspiracy, and as evidence exonerating the men continues to accumulate, so do accusations that their convictions are more than an unfortunate mistake. When considering the possibility of deliberate or negligent wrongful conviction, most citizens ponder motivation. It seems offensive to the concept of justice and even against personal interests of the players to wrongfully arrest or convict someone. But the state of the city of Fairbanks circa 1997 reveals a climate ripe for such a turn of events.

A critical and almost never mentioned player in the Fairbanks Four case is Mike Pulice. Pulice served as both the Fairbanks City manager and Police Chief for a number of years. Tracking down the exact positions and duties held by Pulice in October 1997 have proved difficult, but it appears he was still on payroll and may have been on leave. It is unlikely that he played an active role in the investigation, but he was highly involved in creating the climate in which it happened. If the series of events which took place following the Hartman murder were a play, Pulice would be the set designer. It was his stage on which these events played out.

The Pulice scandal is almost a parody of itself in its extravagant inclusion of the most cliché scandal elements – allegations involving sex, drugs, public corruption, money, conspiracy, and organized crime.

Mike Pulice – colloquially referred to as “Mafia Mike” by critics – was the man at the center of a controversy centered on money, drugs, and weapons that went missing from the Fairbanks Police evidence locker during his tenure. 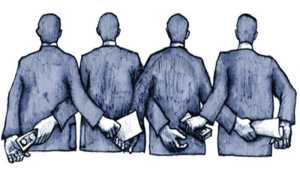 According to court records, two firefighters employed under Pulice, Jimmy Rice and Lee DeSpain, came forward as whistleblowers in the evidence locker thefts and pointed fingers at Mike Pulice. They believed that Mr. Pulice was engaged in an extramarital affair with his employee, that he was running a criminal enterprise openly and preventing information leaks by threatening those in the know, and that he was responsible for the thefts. Mr. Pulice responded to this turn of events by threatening to have the men “set up” if they proceeded with their complaints. One such conversation occurred when Pulice called an attorney for one of the men. The two firefighters resigned from their positions, citing “intolerable” working conditions and fear of retaliation. A police officer who had spent some twenty years with Fairbanks Police testified that he cautioned the men to take the threats by Pulice seriously. What ensued was a long and drawn out litigation which the city ultimately lost, and an investigation into the corruption that went nowhere.

An AP article in the December 5, 1996 Sitka Sentinel made mention of the events and a dollar figure – “With the disappearance of $510,000 from a police evidence locker still a mystery; the Fairbanks City Council has agreed to conduct its own probe into the matter.”

Over half a million dollars in cash was missing, along with an untold amount of cocaine and guns. Hearsay accusations of a local gun dealer pulling up to the old “Main School” building, where evidence was housed, and departing with weapons abounded. In an executive session meeting of the city council, transcribed and published HERE, the city’s approach was clear – the sitting Mayor Jim Hayes (himself later arrested and imprisoned for fraud after stealing money from his own church) and other local leaders pontificated about how, despite not having read the 45-page investigation into the thefts, they felt certain that Mr. Pulice wouldn’t steal money. Mayor Hayes suggested Mr. Pulice step down from Chief of Police into a higher paid position as a high ranking officer, but Mr. Pulice declined, expressing that he was willing to take a “harsh” letter of remand and two weeks off.

By 1997, Rice and DeSpain had already filed a lawsuit and as the case progressed through the system it revealed more and more disturbing details about the inner-workings of the FPD and City of Fairbanks at the time. The accusations of financial mismanagement and corruption at both the FPD and City shook public faith tremendously, and also took a lite out of their respective budgets. When John Hartman was murdered, the community demanded swift justice, and demanded it inside a climate where distrust and anger toward the local powers were at an incredible high. The bottom line is that this was NOT a typical crime in a typical climate. This was a horrific crime at a time that the citizens of Fairbanks were already outraged. Careers and more were at stake, and decisions about what came next were made by people under the employ and influence of a man who is on record using wrongful conviction as a threat against a colleague. One can only imagine how little the lives of strangers, let alone children of a lower class, would have meant in this high stakes game.

We do not know if Pulice had any direct involvement in the Fairbanks Four case, and in fact there is no indication he did. However, the officers who ran the investigation were the same men that worked closely with Pulice for many years. Some were trained and promoted by him into the positions they held. They came up in a professional climate where the kind of behavior revealed in the DeSpain and Rice suit was normative, This case came into the scene of a terribly corrupt and messy police department right at the moment they most needed a victory. And it was, indeed, applauded as an incredible victory. Within a handful of months the Hartman case was cited directly when the FPD requested more funding.

Rice and DeSpain went on to be awarded $1.6 million in 2000 by the Alaska Supreme Court in their suit against the city and Mike Pulice, although both men allege that the damage to their lives was irreparable. Neither are employed as firefighters. Pulice slipped quietly into retirement, and no one was ever held accountable for the evidence locker thefts.

In 1997 the city of Fairbanks was being run by a man who ultimately served significant prison time for corruption and fraud, a police chief who cost the city 1.6 million after openly threatening whistleblowers who accused him of activities that if true and pursued criminally would spell out many felonies and a long prison sentence. The FPD was being lead by a man who threatened wrongful conviction as retaliation for exposing him. There should be no debate as to whether there existed sufficient motivation and moral capability to wrongfully convict the Fairbanks Four for the murder of John Hartman, it is clear that there was both.

When elephants fight, it is the grass that suffers. Yet, the grass remains.