The Fairbanks Daily Newsminer briefly published an article on August 20, 2015 which revealed the detailed statements of Jason Wallace regarding his participation in the murder of John Hartman. The revelation was significant in the case because the statements have remained under a seemingly impenetrable court seal since they were first referenced in a September 2013 filing by the Alaska Innocence Project for post-conviction relief base on actual innocence.. All that was previously known about the Wallace confession was that his statements corroborated those of William Holmes.

The article revealed that the local newspaper had come into possession of the documents when they were inadvertently sent to a reporter by someone who lawfully possessed them.

The article remained online for only a few hours before it disappeared. A court hearing held August 21 provided significant insight into the series of events that lead to the document leak and its temporary removal from the Newsminer website.

Judge Paul Lyle, the presiding judge over the Fairbanks Four case, called an emergency hearing to discuss the leak of the confidential documents. In that hearing, it was revealed that the documents were leaked by Jason Gazewood’s firm. Gazewood is Jason Wallace’s attorney, who recently took his request to keep the statements of his client confidential to the Alaska Supreme Court. Mr. Gazewood has been tasked with helping Wallace to prevent his statements about the Hartman murder from every becoming public. Ironically, or perhaps karmically, it was Gazewood’s office who inadvertently emailed the sealed document to reporter Sam Friedman.

At the hearing, Gazewood sought a gag order from Judge Lyle, hoping to stall or prevent the newspaper’s republication of the story. The Newsminer, represented by Anchorage attorney John McKay, emphasized their respect for the court but argued that any order blocking their right to publish would be unconstitutional. The Newsminer further expressed that they possessed the information for an entire week before making the decision to publish, and described the process of deciding whether to proceed as “soul searching.” The Newsminer ultimately decided to publish the article on August 20th, then took it down a few hours later in response to communications from Jason Gazewood. Attorneys for the newspaper noted that although the Newsminer had only had the article online for a few hours, it had since been republished on at least one blog and had been read there more than 18,000 times.

Indeed, the article attracted rapid attention, as did its removal from the Newsminer’s website. We republished the article here, and PDF and photographic versions of the text dominated local social media feeds. This case has a long and troubled history of exculpatory information disappearing. The speed at which the article traveled following its removal is a testimony both to the level of interest in the case as well as the role that social media has come to play in its furtherance.

In explaining the leak, Gazewood along with his partner and counsel Weiner addressed the court and essentially blamed a paralegal for the slip. According to Gazewood, reporter Sam Friedman called and asked him to relay a decision on the case, and Gazewood in turn instructed a paralegal to forward the information. She did, unaware that the file contained the decision of Judge Lyle and his summary of the Jason Wallace confession.

Judge Lyle did not mince words in responding to the request by Gazewood to suppress the story. “You want a stay? You want an order telling the Newsminer what they can publish? Take it to the Supreme Court,” Lyle said. “Because of your firm’s negligence more than 18,000 people have read this sealed document and for all I know every one of them dowloaded it. You want an order? Take it to the Supreme Court. Motion denied.” 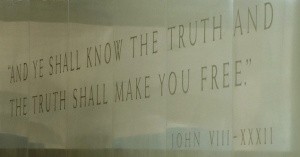 In the end, the hearing revealed the exact nature of the leak, the court’s extreme disappointment at reading a court-sealed document in the newspaper, the struggle of a local newspaper who ultimately made a great decision to publish and then republish information which is certainly of public interest, and underscored something we have said for a long time – the truth will find a way.

The article in questions is viewable again at http://www.newsminer.com/news/local_news/document-corroborates-challenges-new-claim-in-fairbanks-four-case/article_454ef902-4792-11e5-abef-1b7725d19e89.html