His birthday marked the 6,296th day of his incarceration for a crime he didn’t commit. 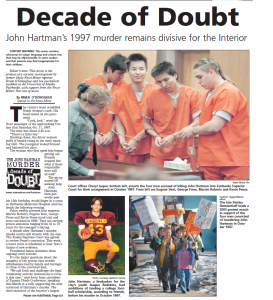 In prison George has grown from adolescence to middle age. He entered prison at a time in life where we all thought thirty was old. Now gray streaks our hair and thirty is just a memory. He is a grandfather. His daughter is older today than he was when he was taken away. The loss and tragedy of the situation are enormous, but he rarely focuses on that. George has managed, against the odds, to grow in other ways during those years. He has managed to find peace and acceptance for this life path, and has kept a steady determination to fight toward exoneration. His absolute faith that the suffering he and the other three men he was convicted with means something has long been an inspiration and source of solace to the family, friends, and supporters who fight for his release. If, George has said, their wrongful conviction and incarceration leads to changes in the system and the social concept of justice and equality in Alaska, even if it is only enough to prevent one wrongful conviction, it is a suffering he is willing to endure.
George received the longest sentence in the case. There is no rhyme or reason behind the sentencing disparity, but there are some real consequences. George will only leave prison if he is exonerated. There is no second chance – no side door for him. If he is not freed, he will spend his last birthday on Earth there.

Yet, George has kept his sense of humor. He has kept the desire to learn, kept standards. He has held on to his love for his family and friends on the other side, and has fought the hard battle to keep faith and mostly won. He has voraciously studied the fields of philosophy and psychology, with an emphasis on cross cultural communication and social psychology. He has spent the time bettering himself, playing cards, drawing, letting time pass without letting it pass him by entirely. He is remarkably well read, articulate, and as steady and funny as he ever was.

And out here, he is just missed. There is an empty space where George should be in so many lives and places, and that space will always exist and it will always hurt until he comes home.

Happy Birthday, George. Whatever life brings, or means, or throws your way or ours, just know we are in it together. We’re still fighting and waiting, and one of these birthdays we will see you at home.

Below are letters from George that have arrived throughout the years for the blog, links to the Fairbanks Four documentary by KTUU, and a radio interview by George.

Letters from George HERE and HERE