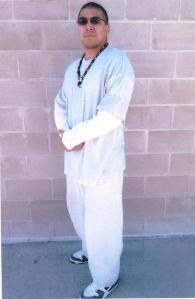 When reporter Dan Bross of KUAC did his short radio story on the reward in the Hartman Murder being increased to $35,000 he provided us with the unedited audio so that we could share it here on the blog.

We are pleased to bring you a longer conversation with Eugene Vent, who talks at length about how much the movement to free the Fairbanks Four has lifted his spirits, and of his gratitude for all of you!

A conversation with Eugene will always leave a smile on your face – his optimism is heartening, his laugh is contagious, and we are lucky to have one friend who can do that for is. It is a wonder that Eugene can be such a beacon of light from such a dark place.

Below, Eugene speaks from prison, where he has grown up. Where he was sent at an age that most young men are looking forward to getting their first car, to summer, to moving out of their parents house. Where he has pondered for a decade and a half the nature of injustice, of social segregation, the nature of racism, and the corruption of power, in the years where most young men are able to ponder such things on college campuses, or over dinner with friends. Where he was waited for the arc of justice to bend in his favor. All of this in prison – where he could grow into an old man unless this injustice is corrected.

1 thought on “Endess Graditude – An Interview with Eugene Vent”