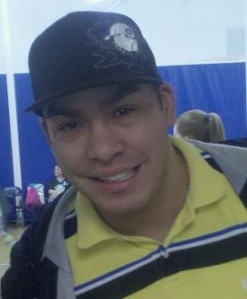 Gary Edwin is originally from Tanana, Alaska. He is the proud father of five, and works for Doyon Drilling.  Gary is arguably Marvin’s most important alibi. In 1997 he was 24 years old, working as a substance abuse counselor, and spent the evening with his wife, Marvin, and Angelo at the wedding reception at the Eagle’s Hall. His younger cousin Angelo Edwin,  spent the entire evening with Marvin. Both Angelo and Gary appear over and over in Marvin’s timeline which you can read HERE.

Through the years there have been many accusations from the community that the Native witnesses that came forward as alibis in this case had alcohol-affected memories and were conspiring to create a cover-up for the Fairbanks Four. It is important, then, to note that Gary was not drinking the night of the murder. It is also important to note that Gary and his brother Angelo went voluntarily and immediately to the police when they heard Marvin had been arrested for a crime committed that night, and that they had not had time to falsify a story, and in fact made statements before anyone knew the time that the assault had been committed against John Hartman (read more about the time of the crime HERE). In a nutshell, the prosecution’s contention that the alibis were either drunk or making up stories simply hold no weight whatsoever in regards to Gary Edwin.

Gary lives with a burden that is tragically not unique in this case – he does not need to read case files, newspapers, opinions, or rulings to know that his young friend was wrongfully convicted. For him there is no speculation of police misconduct, no question about whether or not the evidence in this case was manufactured – he watched it happen. He has never read the content on this blog, yet his story is painfully familiar. It is the kind of thing that a person never forgets. Below, he tells his story in his own words:

“I spent the entire, well hours you know, of that night with Marvin. I would say from around midnight until at least 2 am, even later, when the reception ended. He sat with us at our table, and I saw him basically the whole night. Dancing, visiting, having fun.”

Note – Gary had a conversation with Marvin during the night at what ended up being a very critical moment, when 911 was called to bring aid to a beaten and shaken Frank Dayton (whose assault  you can read about HERE). Although no one, including the police, had yet established a timeline on the assault for John Hartman at the time Gary first gave the police this information, Gary was having a conversation with Marvin concerning Frank Dayton at the exact same time that Hartman was being beaten to death blocks away.

“The next day I went over to Marvin’s  he was, he sold me a pair of Oakley’s that he had gotten but didn’t like, and I had seen them the night before and said ‘well, I’ll bring money over for them tomorrow.’ So, I brought him the money had he gave me the glasses. He asked if I wanted to go up and play ball, and I told him I would go pick up Angelo on my way home and grab my ball gear, and meet him up at the SRC.”

Marvin was not at the SRC for the planned basketball game. By then he was sitting with the police, insisting that he was innocent and pleading with the interrogators to listen. Gary Edwin called Marvin’s mother.

“And then his mom asked if we had seen what was on the news. And she said they had picked up Marvin, George, Kevin and Eugene. And I was like, damn.

She said, ‘I thought you guys were with Marv last night.’

I asked, what’d you guys do after the reception? And he told me that after they stopped by the bar or party they kinda drove around a little bit, that they went through the drive-thru, and then he dropped him off at home.

So, I was like, wow, you know, we need to go down to the police station and tell them, make a statement. We thought, of course, that was the thing to do.”

On the Interviews with Police

When we got down there, the detectives were acting pretty weird about our statements, we were like, “hey, we were with Marvin all night, you know from this time to this time.”

When I went in with the detectives that were taking my statement they kept trying to twist what I was saying. Finally it just came down to me just wanting to give a statement and get out of there. So was like, just give me a piece of paper and I’ll write it down for you. And I was so uncomfortable, I was writing it, but I was more worried about getting out of there.

When I got out to the lobby, Angelo came out of his room after me, and he was really shook up. And one of the detectives grabbed Angelo by the arm and was like, “You better make DAMN sure you know what you’re saying to be the truth, because we have a 15-year-old kid that’s been murdered and this is, this needs to be taken serious, or something to that effect.

When we left, Angelo said he experienced the same thing while being interrogated, or while he was trying to give a statement.”

On Why These Memories Remain So Clear Today

“You know, I went in believing I was doing the right thing. To show up and have people that are supposed to help and protect you, making you feel like you actually did something wrong, or you are involved in something that’s wrong, it’s….it is a real eerie feeling.

I was twenty-four in 1997, four years older than those others at least. I mean, more or less, we went in there thinking we were doing something to help the police, and by the time we left it was like, we wanted to run, just get the hell out of the police station. I was educated, and I wasn’t as afraid because I know my rights. But the young people that didn’t know their rights, maybe the only interaction they had with police officers was this, was bad, I totally understand how bad it must have scared them.

On What It Is Like to Watch The Case Unfold

It made me really fear Fairbanks Police, for one. I actually moved out of Fairbanks after all of this. Even when we were in Anchorage, when we were there to testify, that Detective and Jeff O’Bryant, they followed us around Anchorage. It was clear, always, trying to intimidate us. My cousin Patrick, they were hard on him. He couldn’t deal with all the harassment from them. It was…..it was unbelievable, but it was happening. Yeah, it changed, wow, it changed a lot of things….. those memories will always be there.”