Human beings can feel honesty. Which is why this post is so important. There is much information about this case available. Transcripts, trials, interrogations, articles, and the like. And in those, you have to search for the truth. But in Eugene’s own words you can feel the truth. Not because he is the next great American novelist, not because he reaveals shocking new information, but simply because he is telling his story and you can sense that it is honest.

This case is complex and the details can be overwhelming. Because Eugene’s letter is specific to his night, here is some background for reference:

Eugene Vent left a a party at the Alaska Motor Inn on foot when the police were called by the hotel clerk. The hotel clerk had called repeatedly to ask police to break up a loud party in one of the rooms. They were slow to respond. So slow, in fact, that the clerk was eventually so frustrated that he called and falsely reported that one of the party goers had pulled a gun on him. The police responded immediately, and the kids at the party took off on foot. They caught one of them several blocks away – Eugene Vent. They then drove Eugene to the hotel clerk and asked him if he could identify Eugene as the gunman. He did. They also showed him a photograph of the clothes that John Hartman, now fading in ICU, had been found wearing a earlier in the night and asked the clerk if he recognized the clothes. He said that he did, and that the kid wearing them had been one of the partiers at the hotel.

Ultimately, all of those things were false. John  Hartman had not been at the Alaska Motor Inn that night (Read about his last night HERE). No one pulled a gun on the clerk, that story was a lie. The clerk did recant his statements about the gun reasonably quickly, but it was too late. His identification of Eugene as a gunman created suspicion in the police that Eugene may have been involved with the assault on John Hartman, and over the course of eleven hours police aggressively interrogated Eugene until he eventually made incriminating statements about himself and the three others. (Read Eugene’s Interrogation HERE).

There is a lot of information about this case out there. Transcripts, articles, news stories, interrogations, interviews, timelines, blogs, websites, and the like. But sadly absent from all of that information is the voice of the four young men to whom the cost of this case has been so real. Anyone can take many things from you against your will, including your freedom. But they cannot take your voice and they cannot take the away the truth.          No one can take your story. Below is Eugene’s story, written this October from the Hudson Correctional Facility:

“Time is what I took for granted early on in my life. I made decisions based on the fact that I would have plenty of time. On the October 10, 1997 I left my family to go drink alcohol with my friends from school. I drank beer, drank hard liquor, and even smoked marijuana. I attended a house party, a wedding reception, and last but not least… an Alaska Motor Inn party.

At this party there was a lot of noise and the clerk did his job by telling us to leave. We refused, and this clerk called the police before an altercation eventually developed in which this clerk sprayed my friend with mace.Immediately following this the police showed up; I chose to run…as did everybody else. My thoughts were I cannot get caught drinking again and that I could make it home without getting caught. Boy, was I wrong.

I got apprehended a few blocks away. But then things took a turn for the worst. The clerk accused me of pulling a gun on him and I was charged with assault in the third degree. I never had a gun on me and I didn’t pull a gun on this man. Of course this man was caught on tape telling a coworker that he lied about the whole story to the police, resulting in a not-guilty verdict. Needless to say, the damage was done and it changed the course of not only my life but of countless others…

I was seventeen at the time. I registered a .168 blood alcohol level and I was taken to the youth facility. Police had a busy night with assaults, robberies, and a kid was in the hospital on life support. The police had a hunch that maybe I was involved in some of these crimes so they came to question me, especially since the clerk said I had a gun on me and he also identified the clothes of the kid on life support as having been at the hotel party with us. Of course, I made things worse for myself by being defiant and even lying to the detective. The Detective exercised tactics of interrogation on me including lies, lies, and more lies. After a few hours I was confused, not sure of myself and even afraid of these accusations.

I ultimately (falsely) admitted to participating in the assault of the kid, who I later learned was named John Hartman. I also implicated my three co-defendents Kevin, Marvin, and George during these interviews. I feel ashamed to this day for letting this happen, but I am the one it happened to so I am responsible for my actions.

The next few days were a nightmare, but I knew that in no possible way was I responsible for these terrible crimes……No possible way!!!! I pled not guilty to all charges and even the judge dismissed the charges only to see them reinstated by the Alaska Court of Appeals.

I refused a deal offered by the State Involuntary Manslaughter and robbery in which the State wanted me to lie against the other boys. I had no hesitation in saying “No”  and I went to trial July 1999.

The trial lasted almost a month, witness after witness, no DNA evidence, alibi witnesses…my expert in false confessions was not allowed to testify… I believe that ruling changed the whole Trial.

I was convicted of Murder, RobberyX2, and Sexual Assault…all this with no physical evidence. My admission hurt, and eyewitness testimony from 550 feet away sealed my fate.  I was sentenced to 38 years, and at my recent parole board hearing I maintained my innocence in front of a Board that had the power to release me. I received a continuance until 2014. 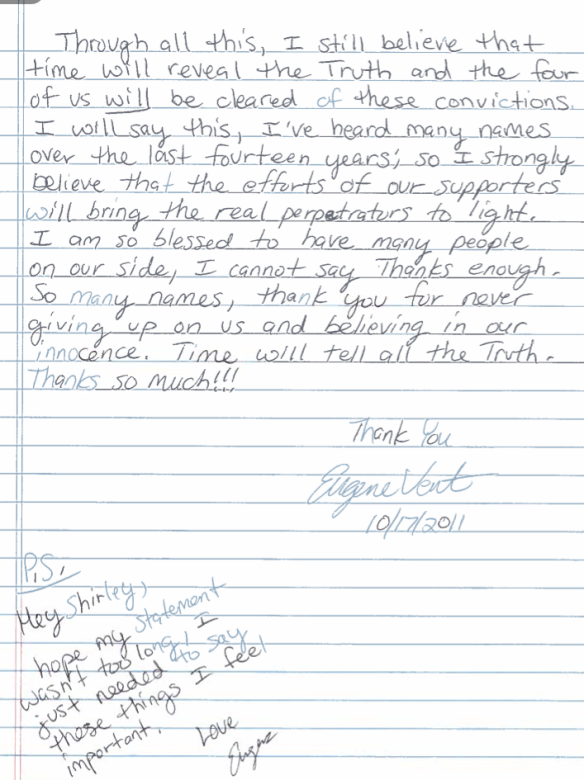 Through all this, I still believe that time will reveal the Truth and that the four of us will be cleared of these convictions. I will say this, I’ve heard many names over the last fourteen years; so I strongly believe that the efforts of our supporters will bring the real perpetrators to light. I am so blessed to have so many people on our side, I cannot say Thanks enough. So many names, thank you for never giving up on us and believing in our innocence. Time will tell all the Truth. Thanks so much!!!